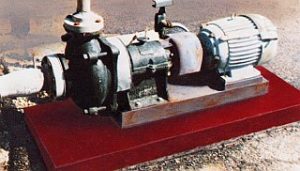 CHOCKFAST RED is a three-component, high strength, 100% solids, epoxy grouting compound, which is used to grout large machinery and to support soleplates in all types of foundation designs.

CHOCKFAST RED, has the following advantages when compared to conventional cement grouts:

CHOCKFAST RED contains no nonreactive diluents which could interfere with the curing mechanism or which could cause material loss during or after cure. Machinery may be positioned at its final elevation before pouring because the shrinkage is negligible. Critical alignments are maintained during machinery operation due to its high dimensional stability and resistance to creep and vibration.

CHOCKFAST RED may be mixed with contractor’s hoe and wheelbarrow or in a small portable mortar mixer. Precondition resin, hardener and aggregate to 18o-27oC (65o-80oF) 48 hrs. before mixing. Thoroughly mix hardener with resin first before mixing in aggregate. Where a very flowable mix is required the aggregate content may be reduced accordingly.
However, in loadbearing areas a maximum reduction to 3-1/2 bags is recommended. Please contact the CHOCKFAST Representative or ITW Philadelphia Resins if less than 3-1/2 bags are being considered.

CHOCKFAST RED, is quick curing, relative to cement grouts, but the cure is thermally gentle. This allows thick pours to be made without causing the stress cracks often associated with a hot-curing epoxy grout.
CHOCKFAST RED may be used in thickness greater than 30mm (1.25″), however, individual pours should generally not exceed 46cm (18″) in thickness and 2.2m (7′) in length.

This website uses cookies to improve your experience while you navigate through the website. Out of these, the cookies that are categorized as necessary are stored on your browser as they are essential for the working of basic functionalities of the website. We also use third-party cookies that help us analyze and understand how you use this website. These cookies will be stored in your browser only with your consent. You also have the option to opt-out of these cookies. But opting out of some of these cookies may affect your browsing experience.
Necessary Always Enabled

Any cookies that may not be particularly necessary for the website to function and is used specifically to collect user personal data via analytics, ads, other embedded contents are termed as non-necessary cookies. It is mandatory to procure user consent prior to running these cookies on your website.